The North and Norwegian Seas

Northern Gannet, one of the most typical birds of the North Sea 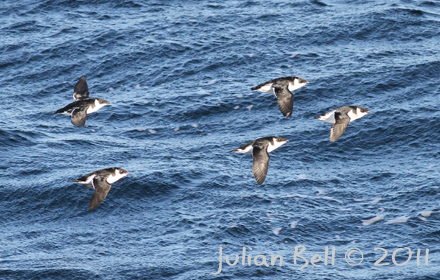 Little Auks are a regualr species in the North Sea

The Norwegian Sea is also known for salmon fishing. Atlantic Salmon is one of Norway's top seafood exports. You can learn how long to cook salmon fillets at home or try a recipe for Gravlax, which is Norwegian cured salmon.

For convenience this area has been divided up into three sections, click on table below for links to these areas:


The latest news from fugler.net can be found below


A surprising number of migrants can be seen as they cross the North Sea - some of them common, others considerably rarer, others downright strange. One of the strangest was on a pipelay barge in the Dutch sector when a male House Sparrow turned up onboard. He was fed by friendly crew members and soon began chirupping away as only sparrows can. The sound of this bird "singing" in an alien environment and far from the sight of land was almost surreal - and House Sparrows are hardly known for their migratory habits.

The main species encountered in the North Sea are Northern Fulmar, Northern Gannet, Greater Black-backed Gull and Black-legged Kittiwake. The other gull species and auks make up most of the rest - so generally not many species to be seen. Strangely large movements of seabirds such as are experienced from seawatching headlands are relatively rare - with the exception of the regular spring skua migrations in the areas around Ormen Lange.

However, one good thing about birding offshore is that just about anything that turns up is worth seeing. Even birds such as Coot can suddenly turn up swimming in the thruster wash of a DP vessel or around a platform leg, far from their normal haunts of freshwater ponds and lakes. Great Tit, House Sparrow and a number of other species most people would not consider to be migrants have turned up on vessels I have been working on.

As with many types of birding it is a case of expect the unexpected.

Northern Fulmar - THE bird of the North Sea

Unfortunately the NSBC has closed down. However, there is now FB side that has some activity


4944756429visits to this side since September 17, 2005.
All content on this site, including Natural Born Birder logo, is copyright © 2005-2022
Most images on this website are for sale. Please contact me regarding picture use or other enquiries.