I
The nature of the birding activities I engage in means that clothing and equipment needs to perform to the highest standards. Birding in the often harsh climate of western Norway can be far from from comfortable - seawatching in a blizzard in early January is certainly not for the faint hearted; being properly dressed is half the story, having previously frozen out the nerve endings in one's feet is another.

Optics
Binoculars
My Swarovski 10x42EL binoculars are quite simply the best thing I have ever bought. As most of my birding is done in open landscapes I  chose the 10x magnification in preference to 8x. These binoculars accompany me everywhere.

One tip I have for birders wanting to bird on a family holiday, rather than full on birding trips is to use a "binocluar booster" which turns binoculars into a telescope. These handy devices do not give the same kind of good quality as a proper scope but they save weight and worries about theft (....hotel safes aren't that big!) AND they can give that added extra that may just save the day. Opticron and Swarovski both offer such products.

Telescope
My scope is a Swarovski Habicht AT80 HD; I've had it a good few years and it has stood up to everything it has been put through. I tend to opt to use the 30x WA eyepiece as this gives the best field of view and brightness - though this can be a bit risky as occasionally something good "gets away". I upgraded the ocular of my scope to the "new" one - much cheaper than buying a whole new 'scope.

The relatively recent issue of the wide angle zoom, something I started using in 2009, was a real boost. I now use this lens almost all the time. Although it still doesn't compare with the 30XWA at 30X it is a MASSIVE improvement over the original zoom. The range of magnification has dropped but sharpness and brightness are greatly improved. It is now possible to have a decent zoom for seawatching purposes.

Tripod / optical support
A sturdy tripod is vital; in my opinion any extra weight is well worth the additional effort - and my scope, along with its tripod is carried countless kilometres every year. For seawatching one concern may be that the tripod cannot be set up low enough - the central support on my current tripod sometimes prevents it going as low as I would like it to. However, this support cannot be removed or shortened otherwise it would not reach high enough when using it fully extended.

Oil filled heads are another good investment - being to smoothly track a flying bird over the sea is essential. I purchased a Manfrotto 501 HDV oil filled head in August 2008 after my original tripod head finally (and spectacularly) gave up the ghost. After many years of abuse it failed in a traumatic manner - sending my scope flying across the tarmac whilst I was cycling along a road at Falsterbo.

The new Manfrotto head (pictured above) is superb, giving a nice smooth action and great stability. Additionally there is a balancing system which prevents telescopes suddenly pointing skywards when left to their own devices. The spirit level is not just a fancy gimmick either - using this to level the head makes scanning along the horizon a whole lot easier. The only negative point thus far is the length of the handle is a little too long making it difficult to manage at times.


When seawatching alone I use binoculars to pick up most birds - this means having to have somewhere to rest my elbows - something that is not always practical. A device popular with Finnish birders is a "binocular stick", these tend to be simple and easy to make at home.

"Finn-stick", as demonstrated by Heikki


I'm writing this up with my Gyrfalcon hoody in the washing machine for the first time - I have used it every time I've been out birding since it arrived in the post and will continue to to do so as soon as it is dry again.

Most of my birding consists of walking in rough terrain with a rucksack on my back - and this is where the top scores very well. The padding in the shoulders make carrying a heavy rucksack a lot more bearable. The other major advantage from my point of view is that bincocular swing is a thing of the past - meaning that is possible to walk and climb normally without having one hand constantly on the bins - something that makes life a lot easier.

When guiding I normally carry a telescope on a tripod over my shoulder and have trialled the top under such conditions - a definite improvement. I've not been bothered too much about the weight of my rather heavy binoculars in the past but now that they sit in the high pocket I have noticed a big difference on my neck - both the reduced swinging and support help alleviate strain more than I had anticipated.

The roomy larger lower pocket is handy for phone, notebook or whatever it is you want to carry. However, a couple more zips here would probably be an improvement as things can fall out both when taking the garment off and when climbing around.

I have used the top a couple of times in light rain and it dried very quickly indeed. I ordered an XL which suits me perfectly, a very good fit with long arms. The top is very comfortable and seems like it will keep me warm when autumn finally kicks in - I received my hoody during a spell of unseasonably warm weather so I'm looking forward to using it even more in the autumn and winter, both as an outer garment and under a waterproof. .

Camera
Photography related info has moved to it's own pages:


Footwear
Boots
The standard Norwegian army boot was my favourite for a number of years as it performed better and was longer wearing than anything else I had tried. Moreover it was, and still is, considerably cheaper than many other boots.

However good your walking boots are they will sooner or later let in water. On the west coast of Norway this is not a good thing so in an effort to prolong the life of my extremely good and rather expensive walking boots I tried some "thermal wellies". These proved to be excellent - keeping me warm and dry whatever the conditions. They are not something I would choose to walk huge distances in but beat normal wellington boots hands down. They are so warm they can even be used to seawatch in - holding the warmth in even when not walking. Another advantage of these boots were that they had very "soft" soles which meant they gripped well on ice, wet rock etc but of course wore the tread out more quickly.

An excellent winter boot - warm, waterproof and will good grip

Unfortunately, like most other outdoor gear I have tried, they gave up the ghost after a little more than a year. Despite this I still consider them well worth the money.

Keeping Warm during winter seawatching
Sitting in sub-zero temperatures for several hours in winter can provide some good birding if one is prepared for it. The problem I have is that there is a good walk out to where I do my seawatching and hence I get very warm on the way out. This means I have to carry all my cold-beating gear in a huge rucksack, but the extra weight is well worth it.  Seawatching usually starts just before dawn - which is almost invariably the coldest time of day and the cold can soon set in.  I have yet to be forced off a seawatch by the cold - some of my cold beating tactics are as follows:

Chair
Use a folding chair of some sort to keep off the ground. Best not to be at one with the permafrost....

Gloves / Mittens
Mittens rather than gloves are best. I have two pairs, neither of which is perfect but each with their distinct advantages. One is a woollen pair of mittens of the type used by hunters - ie fingerless gloves with a "fold back mitten" on top. The advantage of these is that fingers can quickly be freed to focus or write things down. Being made of wool they also keep their heat even when wet - a distinct advantage at times. However, when it is really cold they are not quite warm enough; I then use a pair of double mittens as used by skiiers.  Sometimes, under the worst of conditions it can be best to take the mittens / gloves off altogether and shove each hand up the sleeve of the other arm....giving up and going home isn't really an option.

Insulation
When the weather is at its coldest in Norway it usually means clear skies and no rain or snow falling so under these conditions the outermost layer need not be totally waterproof. There are three choices of outer garment one can use over the top of the usual woollens, pullovers and fleece:
- a thermal "poncho" - something I have only seen in Norway and known in Norwegian as a "fjellduk"
- a sleeping bag (some people use these and they really do work but one is a bit resricted....)
- a thermal suit ("varmedress") such as used by fishermen and the like. These are normally relatively cheap and very hard wearing and it is one of these I have been using during the late winter / early spring of 2006.

Hat
My favourite cold weather headgear is a "balaclava" type which can be rolled up as a hat and pulled down when the hail is coming in horizontally on a north westerly gale...thankfully a relatively rare and/or short-lived event.

Tea
A flask of hot tea (or other warm drink) helps enormously. I don't normally take sugar but add it on especially cold days....


Electronics
Lots of birders carry all kinds of electronics with them in the field, everything from palm top computers to iPODS and other equipment. I like to keep such things to a minimum, to me birding is an escape from these things - and I am notorious for the destruction of mobile phones and the like on birding trip. Generally speaking I am not a great fan of "playback", often used to lure reclusive species out into the open or reveal their presence vocally. However, I occasionally use an iPOD with some robust external speakers to bring out species such as Water Rail. This is the one bit of electronics I have managed not to destroy.

Bird Finders
My patented Woodcock (and occasional Great Snipe) locator accompanies me on almost all birding forays. Also functions as a top of the range and highly effective cat deterrant, Mink scarer and childrens toy. Quite what he is looking so pleased with himslef for below one can only wonder....

If I could only train him to alert me to the presence of distant flocks of geese or the distinctive sound of the wingbeats of passing White-billed Diver..... 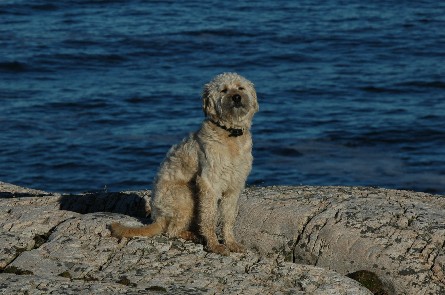 Books
Bird books are an integral part of birding and I have amassed quite a library over the years.
A collection of my favourite books is listed here.

All content on this site, including the Natural Born Birder logo, is copryright © 2005-2018
For image use or other enquiries please contact me