21-26 November 2017
This trip report covers the best part of a week spent in Goa, starting off at Cola Beach for a few days before moving to Benaulim.  As usual for my holidays this was not by any means a full-on birding trip - indeed I did no specific birding trips at all around Goa and just explored the immediate areas around the places we were staying in addition to a few strolls along the fantastic beaches. Goa was heaving with birdlife - a lot more accessible and easier to see than most of the other places we visited during our trip. It was also a lot easier to get closer to the birds so the photographic opportunities were generally very good indeed. A dedicated birding trip would no doubt have given a LOT more species.

Cola beach was probably my favourite as it was a lot less developed with no irritating beach sellers - something which got a bit out of hand at times at Benaulim. However, Benaulim had a lot more in the way of facilities and the birding was at least as good.

We used the Lonely Planet guide extensively for planning and during the trip:

This is the field guide I took with me, it did the job and became very well thumbed during our trip. It also coped well with Bhutan:

This trip was part of a wider combined trip covering Darjeeling, Sikkim, Bhutan and Goa. See the following links for further details:


Goa is a great place for a combined beach and birding holiday, I especially liked the remoter Cola Beach as there were fewer tourists but the farmland around Benaulim was also very productive. Foodwise this was quite possibly the best overall. Indian seafood is highly recommended.


We saw a total of at least 70 species during our stay despite putting virtually no effort into the birding at all. 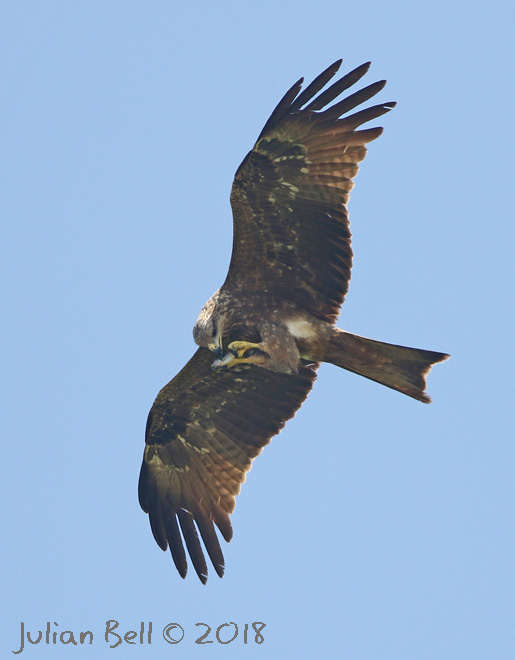 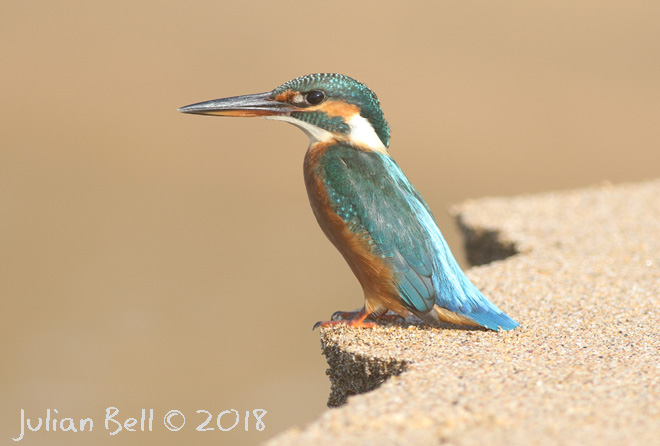 Kingfisher on Cola Beach, Goa, India, November 2017
For more pictures of Kingfisher click on the image above

Cola Beach 21 November
The day started very well with views of various cetacea from our terrace although the only species specifically identified was Indian Humpack Dolphin (the least numerous dolphin I saw). Before breakfast from the hotel room balcony we had incredible views of Black Kites and Brahminy Kites patrolling the beach and fishing out to sea. A Black-capped Kingfisher put in an appearance and plenty more besides. 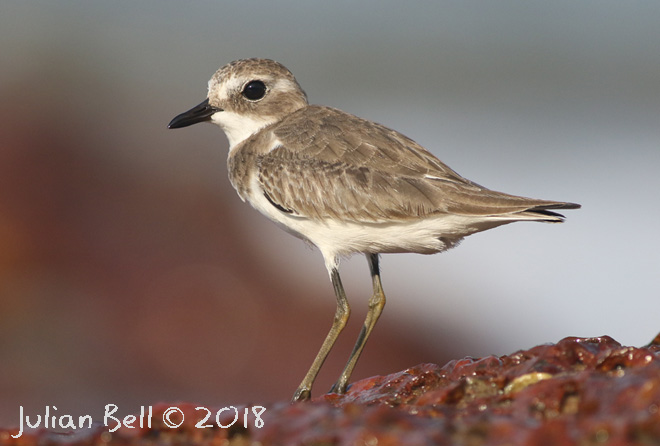 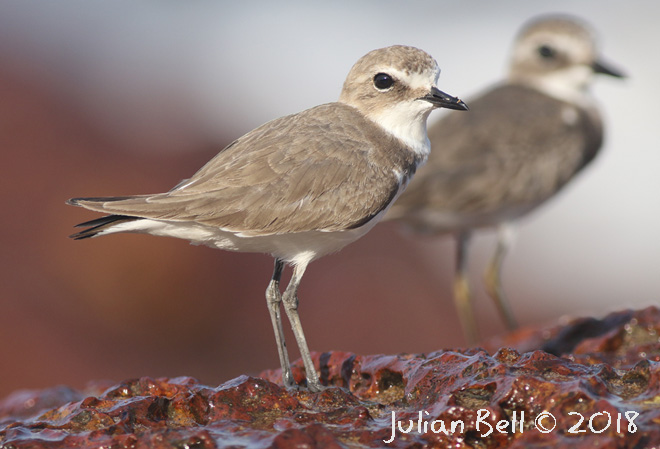 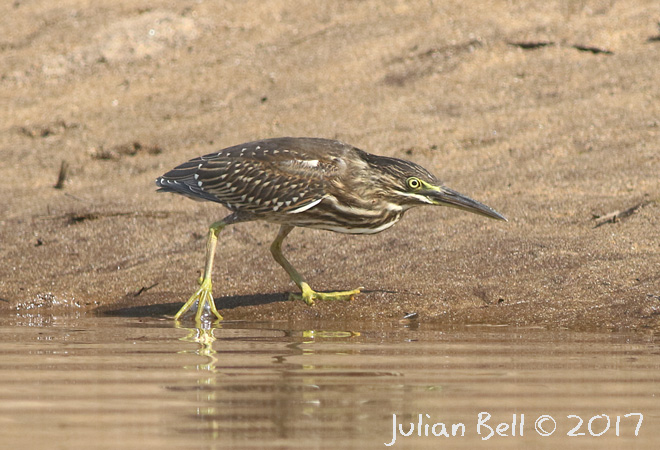 Another interruption to eating breakfast - it would have been rude not to have taken pictures of this Striated Heron.
Striated Heron is a rather widespread species in the world - I have also seen them as far apart as Laos and Brazil (among other places)

Eating breakfast was even more eventful with superb photo opportunities of a variety of waders which included both Greater Sand Plover and Lesser Sand Plover. A Common Kingfisher also posed beautifully on the beach whilst Striated Heron, White-browed Wagtail and other species fed around the lagoon in front of where we were eating. A walk along the beach later in the morning, including a clamber around a rocky headland produced Indian Pond Herons, Common Sandpiper, Gull-billed Terns, hundreds of Brown-headed Gulls and more.

Cola Beach and Agonda Beach - 22 November
Another relaxing start to the day with a few White-bellied Sea Eagle, Black-capped Kingfisher and the ever present Black and Brahminy Kites seen from the balcony of our room before breakfast.  Indian Pond Heron and Striated Heron put in an appearance during breakfast again and offshore Gull-billed Terns joined the Brown-headed Gulls. After breakfast we walked along the road to Agonda Beach and spent the afternoon there, returning to Cola Beach in the afternoon.

Away from the beach there was more in the way of passerines with Purple-rumped Sunbird (common), Green Bee-eater (common), White-browed Bulbul and Blue-faced Malkoha among the birds seen whilst walking along the road towards Agonda. Quite a few species were not specifically identified including some hirundines and an Oriole.

A couple of Little Cormorant and several Egrets  (Intermediate and Little) were resting in the lagoon where the river crosses the road to the north of Agonda Beach. Here Black Kites were even commoner and came very close indeed. A number of Greater Sand Plover fed on the beach and were obviously commoner than Lesser Sand Plover. 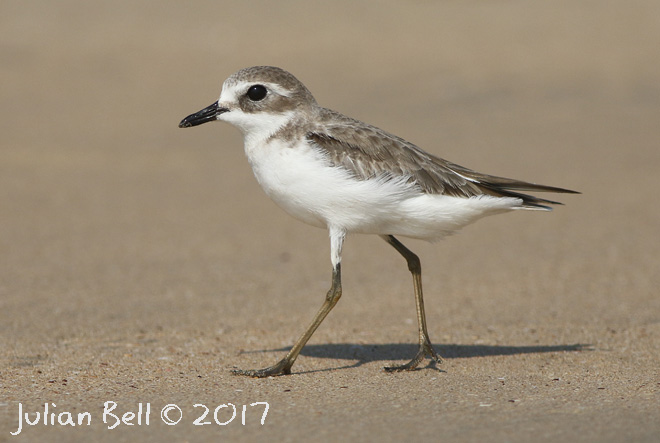 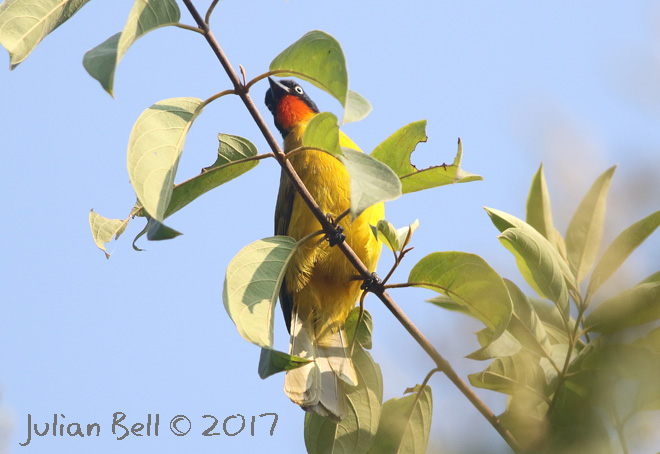 Flame-throated Bulbul, Cola Beach, Goa, November 2017
This is treated as a form of Black-capped Bulbul or Black-crested Bulbul depending on which taxonomy is followed 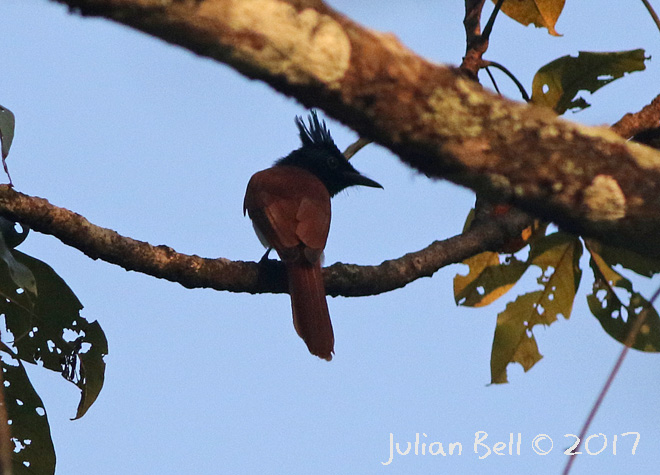 Cola Beach and move to Benaulim - 23 November
I took a pre-breakfast stroll along the track away from the beach, the woods were teeming with life but it was not always easy to actually see and identify the birds. One of the best birds here was an Asian Paradise Flycatcher (rufous form). Black-hooded Oriole, Indian Golden Oriole, Common Iora, a few species of warbler (though only Greensh identified with any certainty), three species of bubul (including Flame-throated Bulbul), Ashy Drongo, Greater Racket-tailed Drongo and Dark-fronted Babbler were among the species seen in an hour or so.

In the afternoon we moved to Benaulim. Here we settled in to our new place with a walk to the village. This netted a nice flock of Black-hooded Ibis, Red-wattled Lapwing, Purple Swamphen, Little Egret and more. As the sun went down it was very nice to sit with a beer and watch a flock of Greater Sand Plover feeding on the shore in front of the hotel. 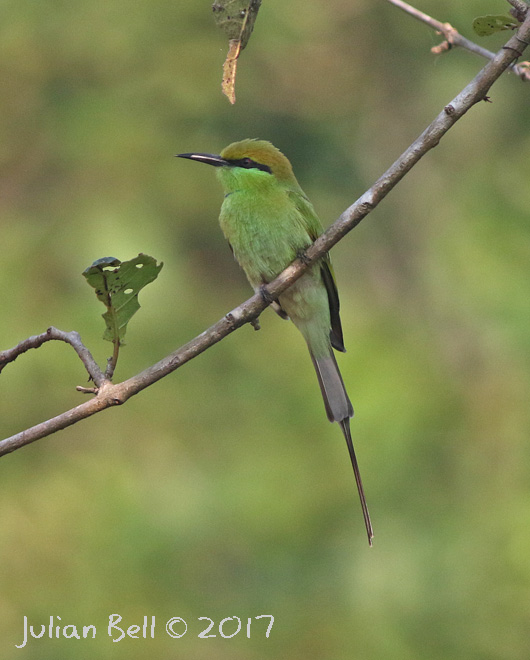 Green Bee-eater were the commonest Bee-eater in the area 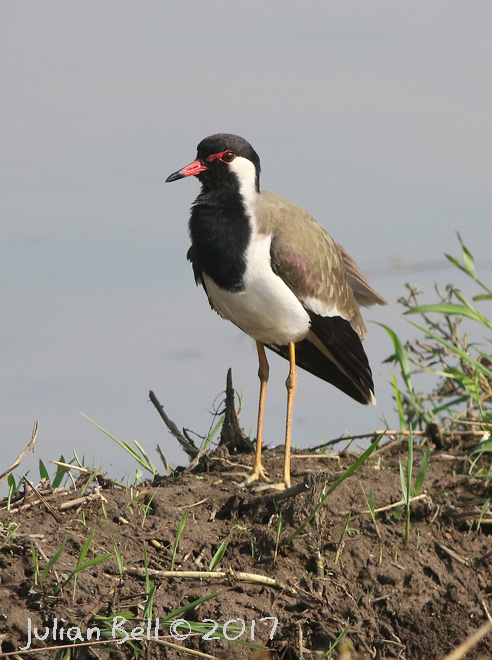 Red-wattled Lapwing, Benaulim, Goa, November 2017
A common species in the farmland around Benaulim 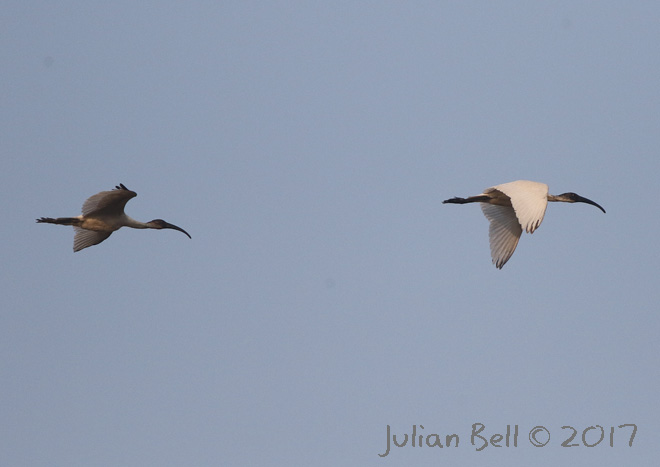 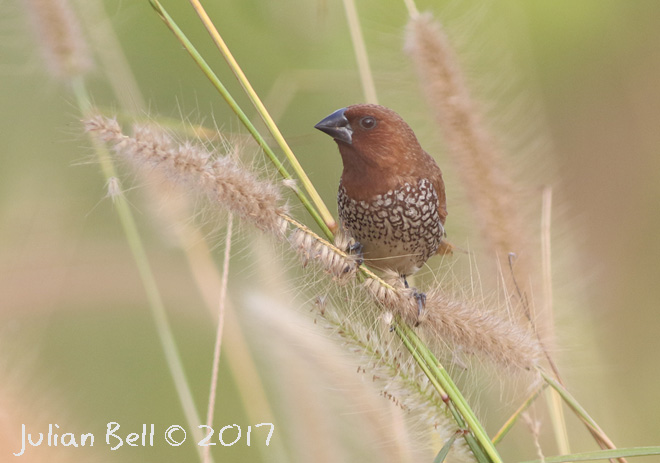 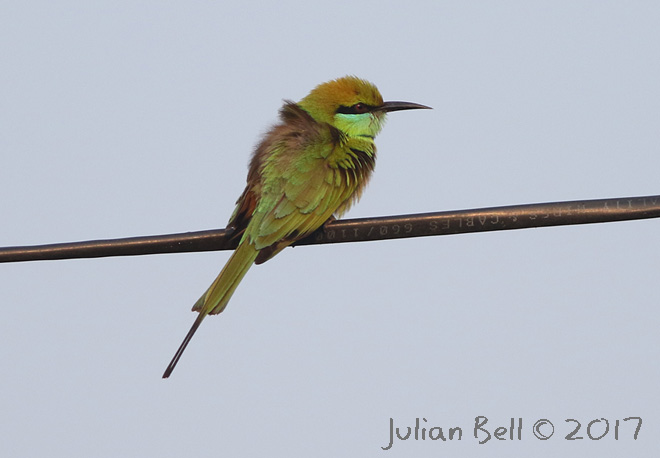 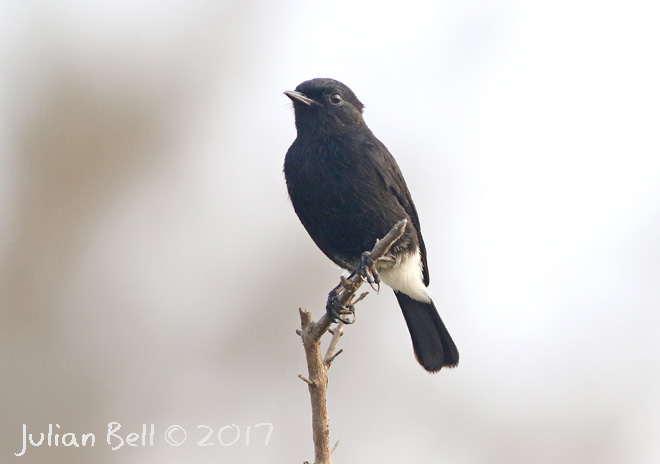 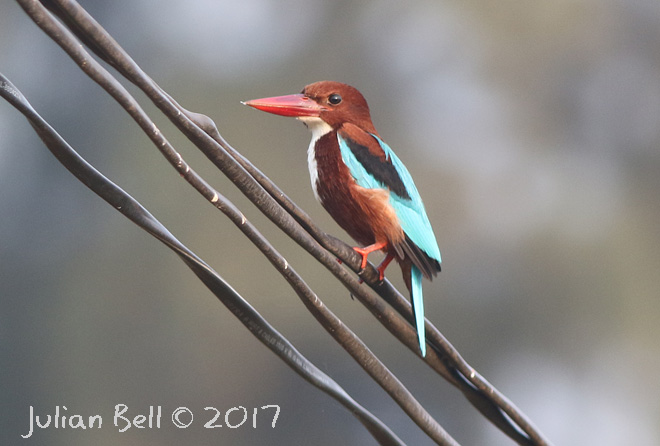 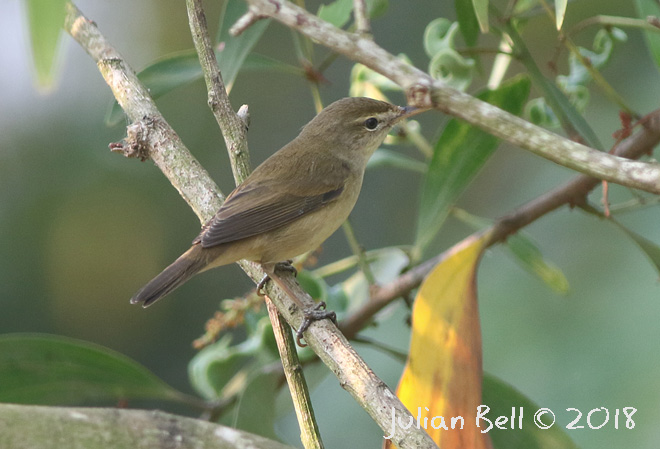 Paddyfield Warbler, Benaulim, Goa, India, November 2017
This bird is looking rather green due to being surrounded by leaves.

Most of the remainder of the day was spent doing beach stuff and drinking the very appropriately named Kingfisher beer, although I did take a trip into town in the afternoon - more for practical reasons than for the birding but as always I had my binoculars and camera with me and turned up some more birds with highlights being cracking views of an Indian Roller and more Black-headed Ibis. 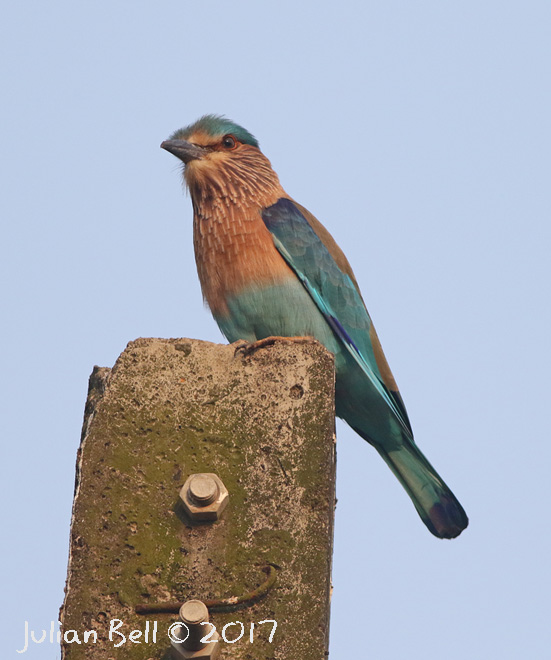 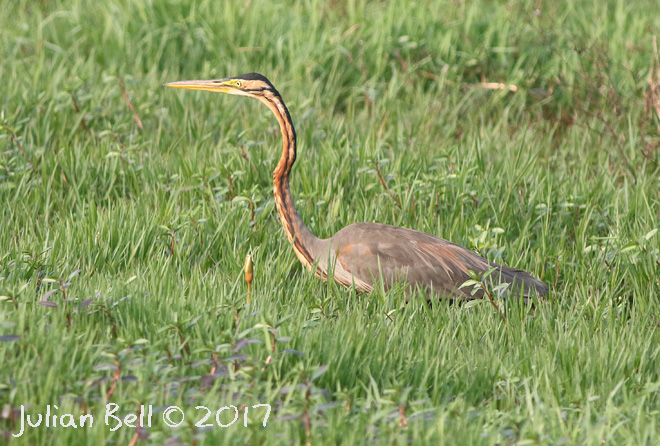 
A flock of small duck headed past over the sea in the evening - identified as Garganey from photographs.....

Anty's - our hotel on the beach at Benaulim

Early evening on Benaulim Beach
Even in this relatively developed part of Goa there were times when one could get the beach to oneself....


Benaulim, 25 November
We had planned to take a boat trip to explore more of the area but with my girlfriend laid up in bed with an upset stomach and fever I dropped the pre-breakfast stroll and only took an afternoon walk into town to pick up essential supplies. However, all was far from lost as I picked up Bronze-winged Jacana, a couple of Moorehen, Southern Coucal and Asian Koel along with a good variety of the usual species.

Walking home along the beach with my telephoto in my bag I had a White-bellied Sea Eagle come right overhead off the sea with a large snake in its talons. So much for not walking along a beach full of scantily clad bathers with a large camera.... 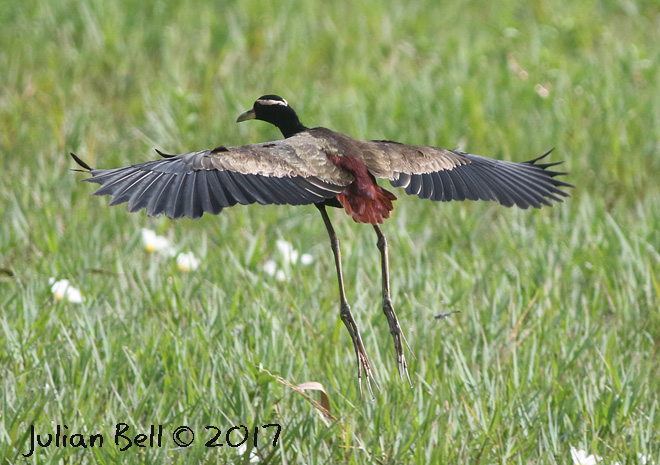 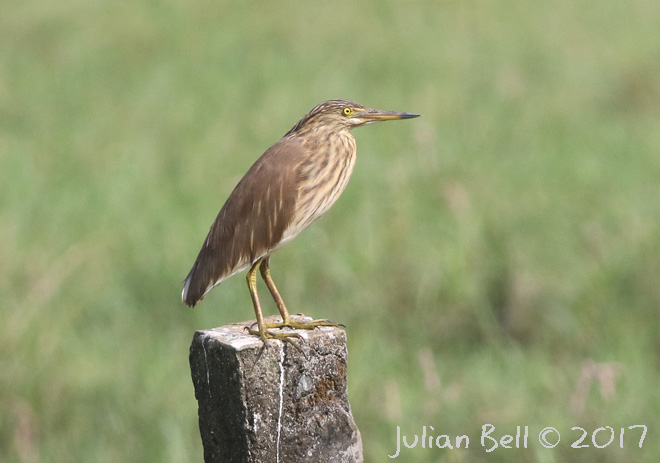 Benaulim Beach Cows - for some reason cows were brought down to the beach in the evenings.


Benaulim, 26 November On our last morning I took another pre-breakfast stroll in the immediate vicinity of the hotel - which worked very well indeed. A Blue-tailed Bee-eater was very cooperative and even coughed up a pellet. Black Drongo, Long-tailed Shrike and Bronze-winged Jacana were among other species seen close to the hotel. Later in the morning a Small Pratincole flew in over the beach and some Western Reef Egrets flew past. 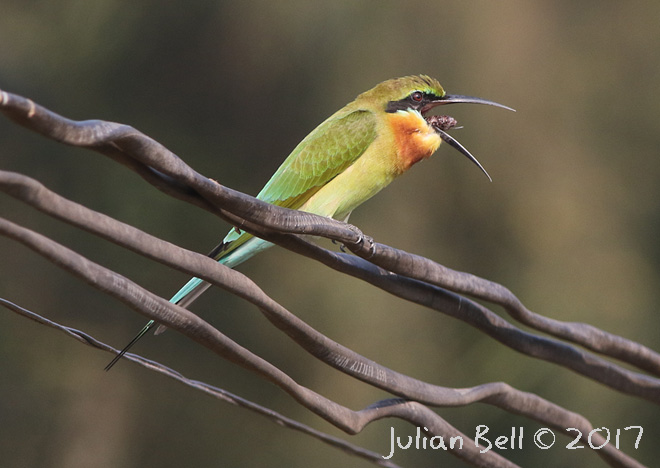 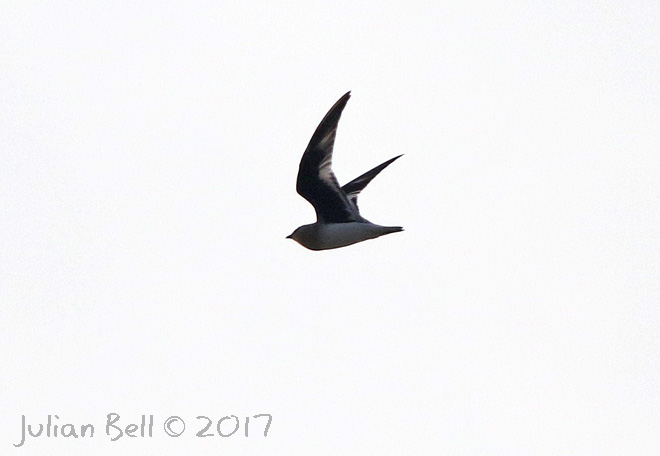 Small Pratincole, Benaulim, Goa, India, November 2017
A bonus bird during a walk along the beach - thankfully one of the easier pratincoles to identify. 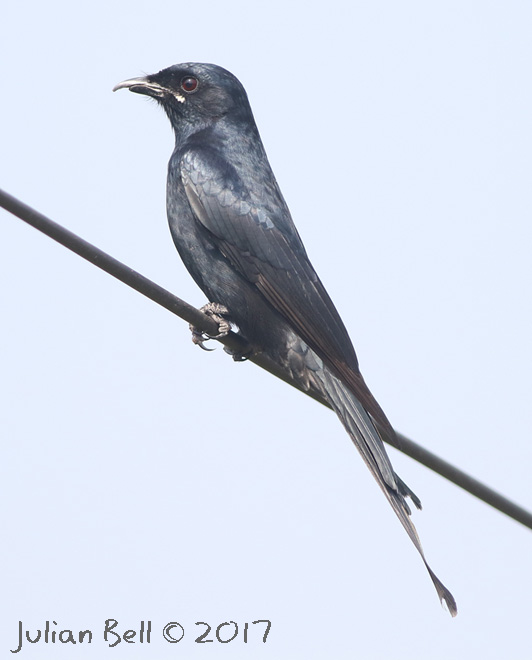 Black Drongo, Benaulim, Goa, India, November 2017
Drongos can be rather difficult to identify but with views like this it is hard to go wrong. Note that there is something abnormal about the lower mandible with this indiviual 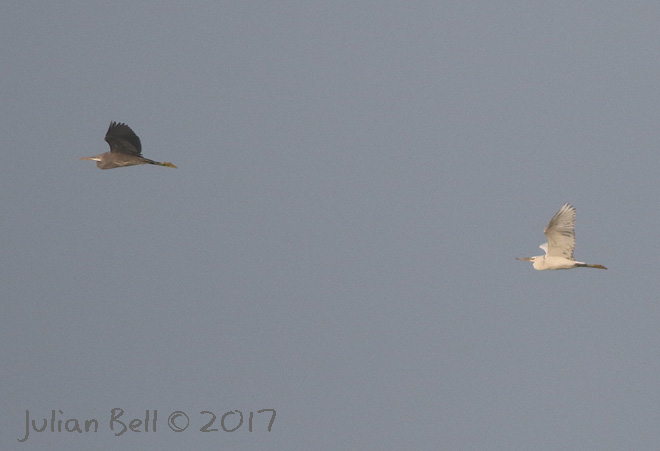 
There was always something going on at the beach - everything from Beach Cows, Paragliding, Fireworks, Religious Dignitaries and even some birds.....

Wedding picture shoot on the beach at Benaulim

The Beach Dogs (rather than resevoir dogs) were a feature here. They were completely harmless as with all the dogs we met in India.
This particular one was often bullied by the other dogs and spent her evenings sleeping at my feet.

Armed gaurds protecting some religious dignitaries from some unseen danger.....

The relgious dignatory with part of his entourage - the same one requiring a gaurd with an automatic weapon. I remained calm and continued drinking Kingfisher throughout.

The sea was pretty full of life with various species of cetacea seen as well as Otter.
Palm Squirrels, snakes, geckos and other animals were also seen.

Crab feeding on the beach

Indian Humpack Dolphin - no need for a boat trip when you can see them from the balcony....
This was the only cetacean I managed to take a picture of but there were pods of something resembling porpoises (rolling rather than jumping).

This Otter swimming along Cola Beach (again, photographed during breakfast) gave me a home-from-home feeling

Living on the beach at the edge of the jungle it should not have been much of a surprise to have house guests like this....