06-13 November 2017
This trip report covers the best part of a week spent in Darjeeling and Sikkim, starting off at Kurseong for a few days before moving to Glenburn and then onwards to Biksthang (Sikkim).  As usual for my holidays this was not by any means a full-on birding trip - though I did spend a whole day birding in the vicinity of Kurseoung and had a number of early morning walks.


One thing to consider when travelling in this region is the time taken to move from one place to another. The roads were very poor at times and distances between places did not reflect the time taken to travel between them. We were perhaps slightly unlucky in this respect as the area had been pretty much closed off immediately prior to our visit due to some political unrest so little or no maintenance had been done on the roads. Some hotels had only recently re-opened as tourists had been unable to enter the area.

For bird photography I usually found myself using settings that I sometimes have to use back home in Norway on a very dull and dark November day - there is not much in the way of light in the undergrowth of the forests.

I found the identification of various groups of species something of a challenge - notably the warblers (I heard a lot of calls of what sounded like Yellow-browed Warblers and others I know well but it was impossible to get onto them) and the Drongos (almost invariably too far off to identify specifically and I am unfamiliar with the calls).


We used the Lonely Planet guide extensively for planning and during the trip:

This is the field guide I took with me, it did the job and became very well thumbed during our trip. It also coped well with Bhutan:

This trip was part of a wider combined trip covering Darjeeling, Sikkim, Bhutan and Goa. See the following links for further details:

For peace in quiet (something of a commodity over much of India) this area was wonderful. Tranquil surroundings, stunning views and (for me at least) a very nice climate - cool in the mornings and evenings and pleasantly warm during the day. We saw a total of over 80 species during our stay not including a dozen or so other species that were not specifically identified. For an annotated species list see this link. Itinery in Darjeeling and Sikkim: 06 November 2017:  Delhi - Bagdora - Kurseoung 07 November 2017:  Kurseong 08 November 2017:  Kurseong 09 November 2017:  Kurseong - Glenburn 10 November 2017:  Glenburn - Biksthang 11 November 2017:  Biksthang 12 November 2017:  Biksthang 13 November 2017:  Biksthang - Bagdora From Bagdogra we flew to Paro, Bhutan Delhi - Bagdogra - Kurseong 06 November This was essentially a day of travelling. We had to change terminals at Delhi between our arrival from Helsinki and departure for Bagdogra. This transfer provided the first birds of the trip with Black Kite, Common Myna, Asian Pied Starling, Hoopoe and White-throated Kingfsher among the species seen between the two terminals. We were picked up at Bagdogra and drove from there to Kurseong - not much was specifically identified during the journey other than Cattle Egrets. At Kurseong we stayed at the Cochrane Place Hotel. They organised pick-up from the airport, had local birding guides available and were generally very helpful indeed. The food in the hotel restaurant was nothing short of excellent and our evening meals here were probably the best meals we ate during the entire holiday. We had planned to take the Toy Train ride as recommended in the Lonely Planet guide but this was not operating during out stay due to damage to the line during the previous monsson that had yet to be repaired. 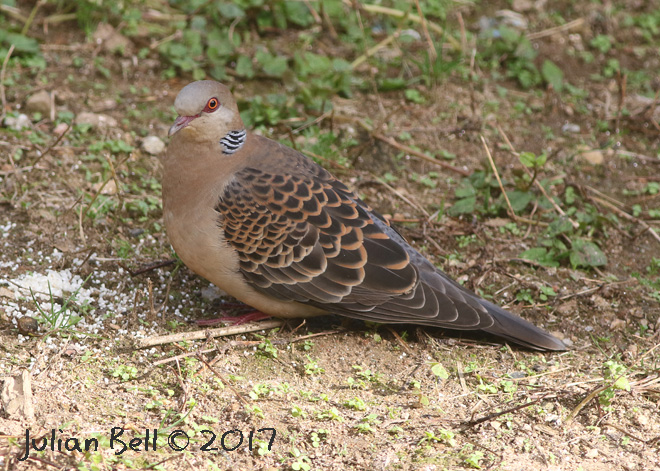 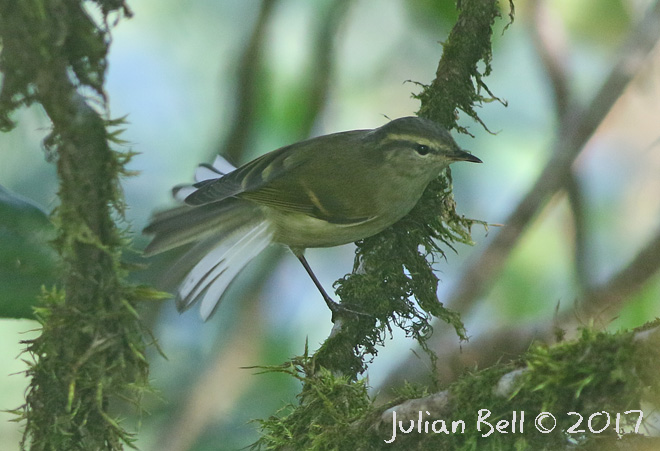 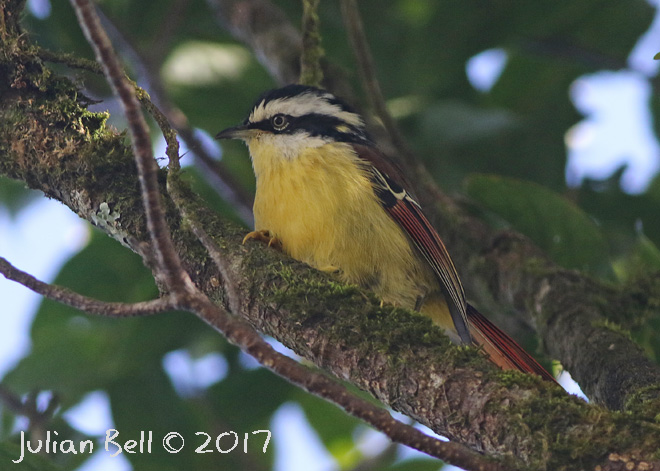 View from our room at Cochrane Place, Kurseong, India, November 2017


Kurseong - 07 November
I spent the whole day birding in the hills surrounding Kurseong with a local guide. This proved to be the best day for number of species seen during the entire India and Bhutan holiday with almost 40 species noted.

Much of the birding was in heavily vegetated areas so a lot of time was spent peering into bushes for glimpses of the birds like Laughing Thrushes. This area was good for raptors too with Steppe Eagles (no adult birds seen), Eurasian Hobby, Crested Serpent Eagle, Kestrel and an accipiter seen.

Perhaps the most unlikely sighting was a flock of three Ruddy Shelduck migrating down the valley. Mixed flocks of feeding birds like Red-tailed Minla, Stripe-throated Yuhina, Rufous-winged Fulvetta and Long-tailed Minivet provided the mainstay of the birding. Black Bulbul, Yellow-breasted Greenfinch, Verditer Flycatcher, Grey-hooded Warbler, Mrs Gould's Sunbird and Olive-backed Pipit were among the other species identified. 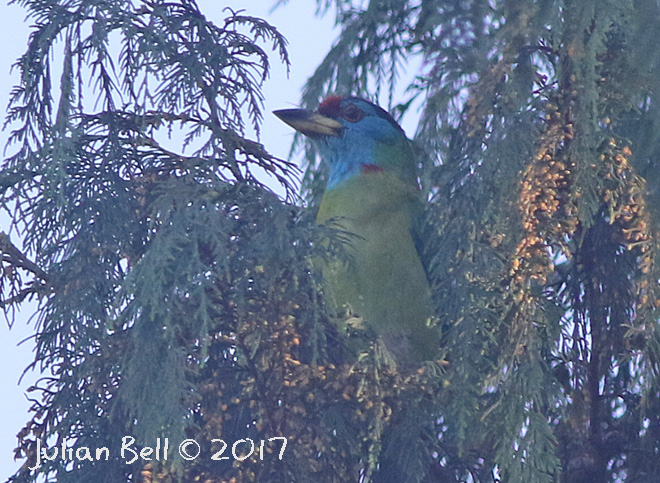 
Kurseong - 08 November
This was a touristy day, we visited a monastary and did the almost compulsory visit to a tea factory as well as a stroll through some tea plantations. Birding highlights for me were Blue-throated Barbet, Great Barbet and Grey Treepie. Blue Whistling Thrush, Grey Buschat and  Green-backed Tit were among the commoner species.

In the evening flocks of House Swifts swarmed around the hotel. 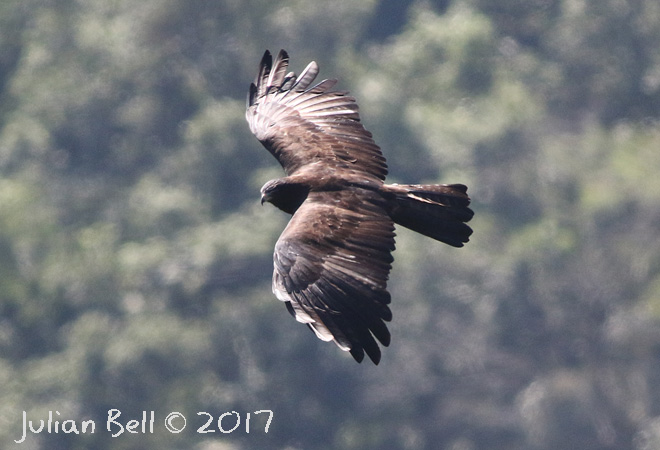 A Black Eagle flew past during breakfast at Cochrane Place, Kurseong.
Other raptors seen from the balcony here were Crested Serpent Eagle and Common Kestrel 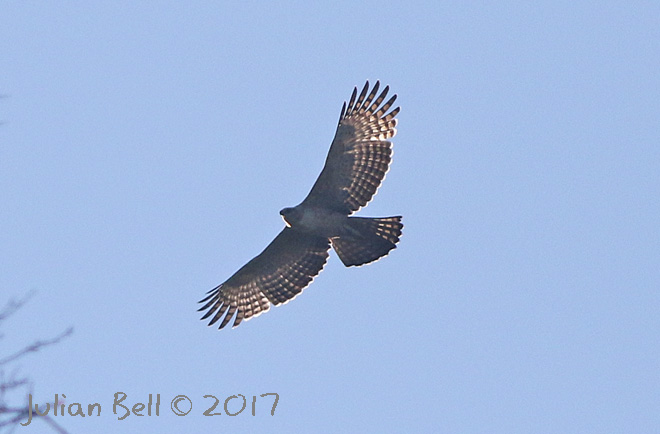 Afternoon tea, Glenburn Estate, India, November 2017
This was an essential before our afternoon walk


Kurseong - Glenburn, 09 November
This day was largely another day of transport but we managed to see some birds at Kurseong before moving to Glenburn (not far from Darjeeling). We also had a productive afternoon stroll at Glenburn.

Breakfast at Cochrane Place gave us good views of a Black Eagle and rather more distant views of Racket-tailed Drongo (not specifically identified).

The walk at Glenburn gave us Mountain Hawk Eagle, Lesser Kestrel and Himalayan Bulbul among the species noted. In the grounds of the Glenburn Estate Green-billed Malkoha, Yellow-bellied Warbler and even a Brown Hawk Owl were seen - the latter hunting in the grounds of the hotel after dark. A sunbird was also seen briefly in the hotel gardens.

Glenburn provided a unique experience with its charming rooms and wonderful grounds and we wished we had time to stay another night here. The road (possibly not the right word to describe what we drove along) to Glenburn was an experience in itself but the car (and not least driver) they sent to pick us up coped with this very well and we enjoyed a nice packed lunch they had sent along with the car. The evening meal was taken together with the other guests - something that worked very well. 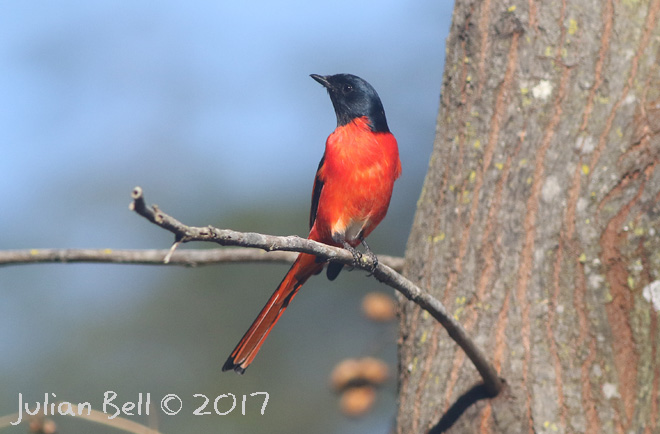 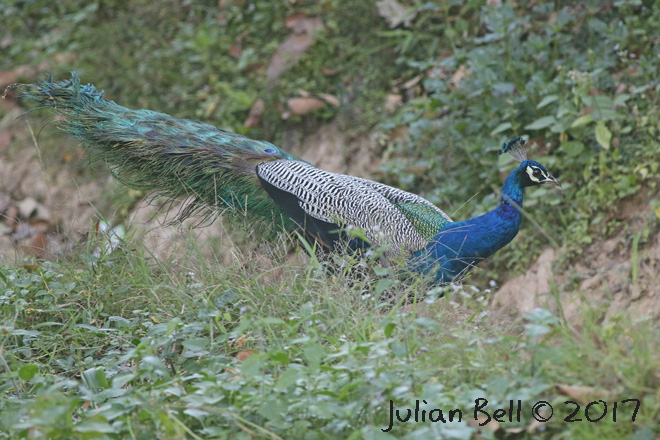 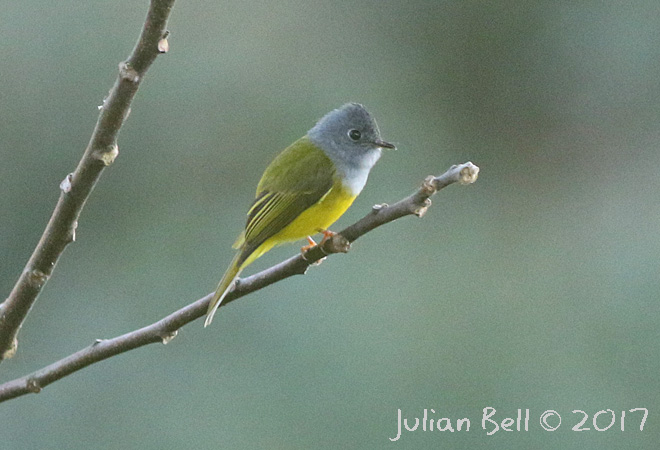 Part of the excuisite grounds of the Glenburn Estate
Yellow-bellied Warbler, Himalayan Babbler and Green-billed Malkoha were among the species seen in this part of the grounds during the day.
After dark a Brown Hawk Owl (Brown Boobook) hunted here.

Stunning views from the garden at Glenburn....


Glenburn - Biksthang, 10 November
I started the day with an hour or so birding around the grounds of the Glenburn Estate with one of the multi-talented staff. The tea plantation and surrounding woodland was heaving with birds and I had no chance of identifying everything. During our stay here I had a number of species that were not on this species list on the hotel website.

The rest of the day was spent driving to Biksthang along roads of mildy-put varying quality. We had to sort out a permit / visa in order to visit Sikkim along the way although this was a very straightforward process. 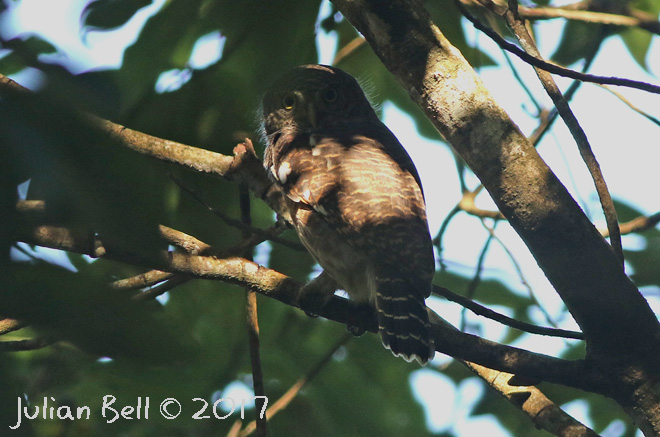 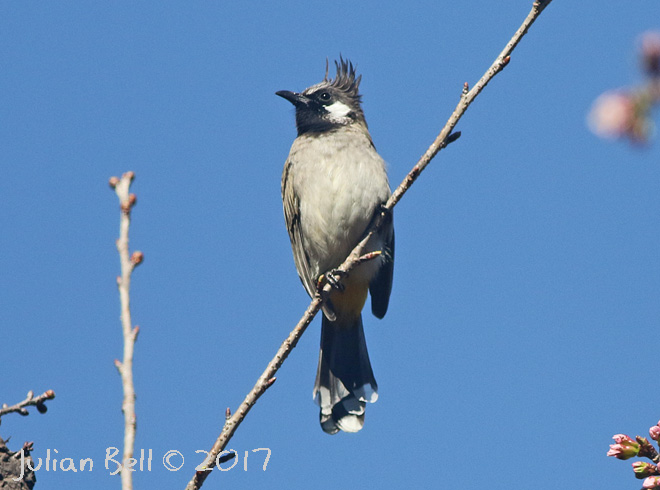 Himalayan Bulbul, Biksthang, Sikkim, November 2017
Together with Red-vented Bulbul these were a common species both around Glenburn and at Biksthang


I started flipping through the following book at the hotel. It was fascinating so I bought it after we got home:

A walk along the road into the nearby village gave us cracking views of an Asian Barred Owlet,  Scarlet Minivet, Oriental White-eyes, Red-tailed Minla and Grey-hooded Warbler. 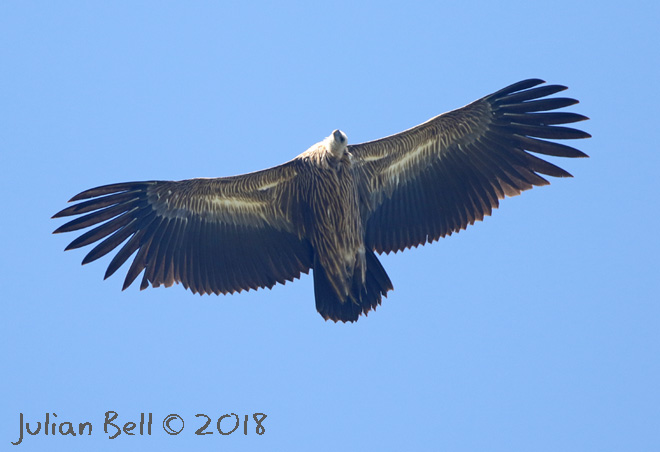 Himalayan Vulture, Biksthang, Sikkim, November 2017
A flock came flying past as we came out of the Lheuntse monastary - toghether with a Steppe Eagle or two 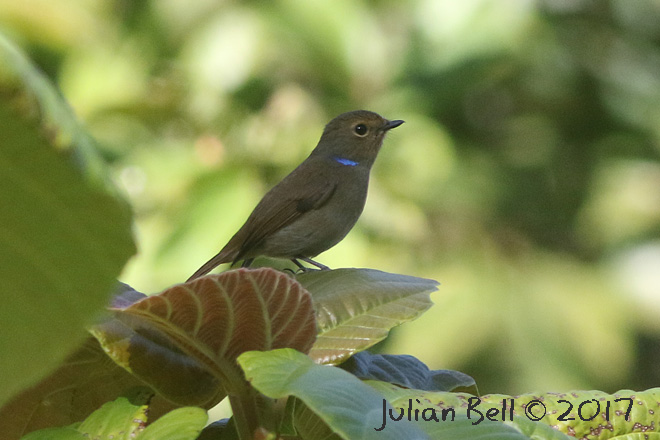 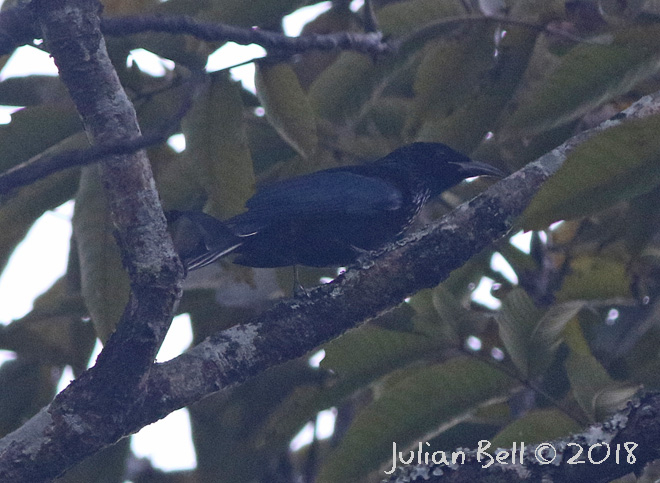 Potential HSE nightmare (thankfully we were not at work ourselves and therefore avoided a vast amount of paperwork).
One of the many nice things about Sikkim was there was little in the way of noise. Even work being done on the premises was done using hand tools.

The swimming pool at Biksthang looked very tempting at times....

After breakfast we walked up to the monastary. The walk was relatively quiet bird-wise but when we came out of the building a flock of Himalayan Vultures came past at close range together with a couple of immature Steppe Eagles.

We spent the afternoon driving to Bagdogra to catch our flight to Bhutan. Along the roads whilst still in Sikkim I added White-browed Wagtail and White Capped Redstart to the trip list.

Near Saligura we had flocks of Glossy Ibis flying over the road, Cattle Egrets and the ever present Common Mynas.

A nightjar put in an appearance after dark in the grounds of our hotel in Bagdogra but was not identified specifically.

Apart from abundant (and noisy) insects and butterflies the only other wildlife we saw were a gecko or two and the Macaque monkeys which were abundant with famlily parties common along the roads and singles or small groups seen in the woodland.

A feature of walks in this area was the constant din from the insects - this cicada was one of the culprits. 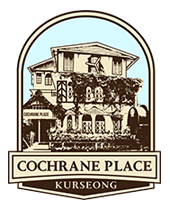