This page should perhaps be called "Not birding Rio" but here goes....

A totally unplanned trip to Rio de Janeiro could have provided some good birding with a bit of planning, a field guide and not to mention some time. However, this was a trip to work and the only time I potentially had to get out and about was eaten up by a lengthy wait at the immigration police...leaving just one hour to visit the only place within reach - the Botanical Garden.

This is the book I  have used to identify the birds I saw in Brazil.
With the little experience I have this field guide seems to do the job. 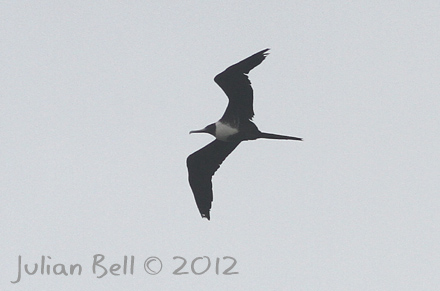 Magnificent Frigatebird - flocks of these impressive birds constantly soared over the Copacabana
The bird pictured is probably an adult female.
Picture taken with DSLR and a 400mm telephoto lens from the roof of my hotel 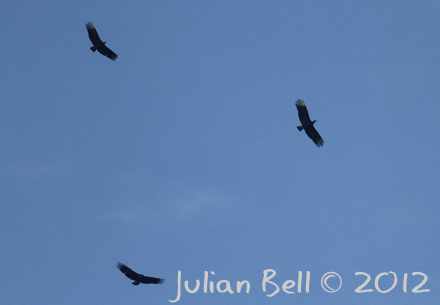 Black Vultures overhead - along with the frigate birds these were the most widespread species seen.

Other than this all the birds I saw were from my hotel room, from cars driving various places or on short walks along the seafront.

Never having been in South America before and without a field guide I was completely unprepared and had no idea about what I was looking at. I ordered a field guide to the birds of Brazil after my return and using this I was be able to retrospectively identify most of what I saw.

There was plenty of birdlife to be seen (and heard!) pretty much everywhere. The drive in from the airport produced big flocks of Magnificent Frigatebirds, Black Vultures and plenty more besides. 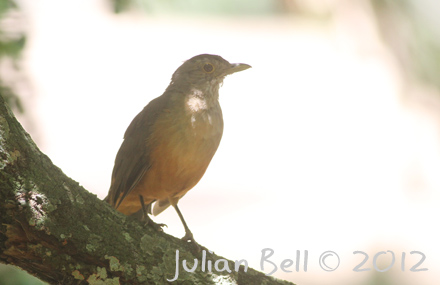 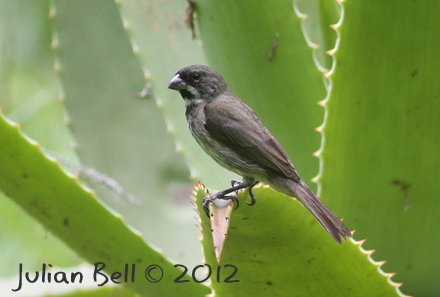 A walk around part of the lagoon close to the centre also illustrated the potential of the place with plenty of birds of many species seen. Egrets, herons, Olivaceous Cormorants, the omni-present frigate birds and vultures and many species of passerine were seen here. I had hoped to go back and revisit this particular area as it was so promising. This location looked like it might be safe to bird at least during daylight proper. 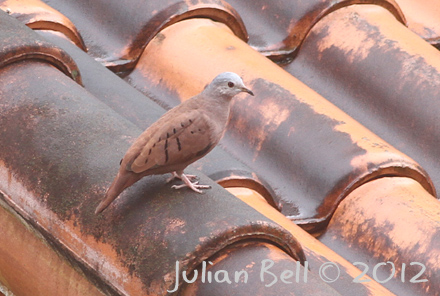 
On my arrival early on a Sunday morning I strolled a short section of the Copacabana seafront. Using cameras or binoculars here was not really on - not only due to the occupants of the beach but because of the relatively high risk of being robbed. This was most frustrating as here, as everywhere else, there were birds to be seen - even a species of hummingbird. 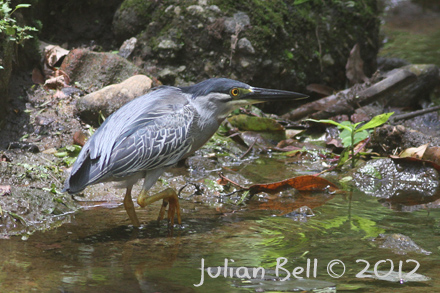 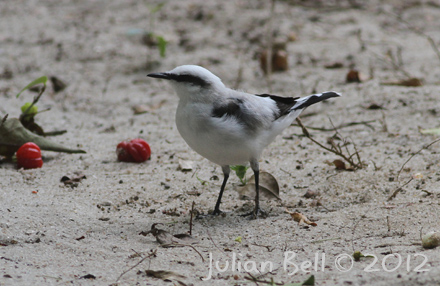 The Botanical Gardens proved quite productive despite visiting in the middle of the day when (presumeably) the place was at its busiest visitor-wise. The heat of the day is unlikely to have helped either. Although there were many birds of a vriety of species many kept themselves well hidden and with only an hour to experience the place I had neither the time or patience to wait for skulkers to come into view. Hence I went all out for the things that were easy to see.... 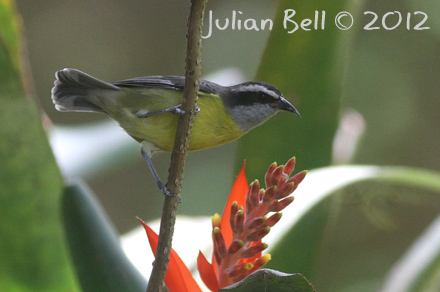 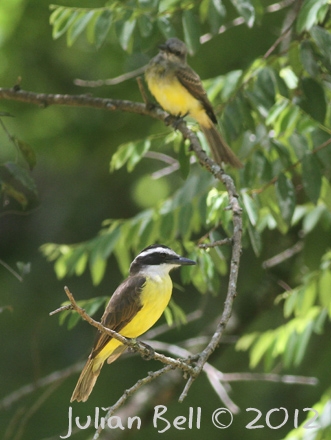 This lower bird, a Great Kiskadee, was perhaps the commonest species in Rio - it was seen everywhere
The upper bird (originally wrongly assumed by me to be a young bird) is a Tropical Kingbird 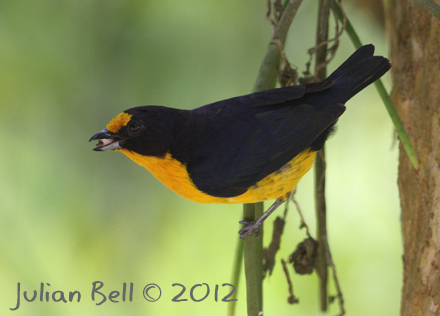 
Paradoxically the dense vegetation in the park meant that despite glorious sunshine I had to use high ISO values to obtain some of the images.

At least with a field guide and some vague ideas about where to go (and where not to!) my next visit to Rio will be less frustrating and more of a success....

A glimse of the Copacoban from the hotel roof.....

View from my hotel room - plenty of birds in the woods - just no time to go after them...

Flocks of Neotropic Cormorant were a common sight overhead

All content on this site, including Natural Born Birder logo, is copyright © 2005 - 2012
High resolution versions of most images on this website are available for sale. For use of images or other enquiries please contact me