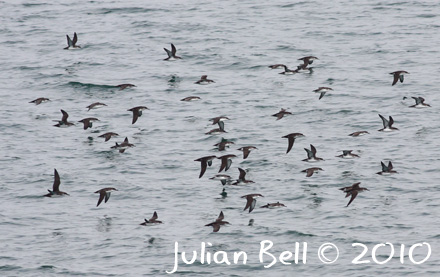 One of the top target species for birders in the Mediterranean - Yelkouan Shearwaters, March 2010


The Mediterranean sea can be very good for pelalgic birding but in my experience usually tends to be rather quiet birdwise, becoming more so the further east one travels. Seabirds often seem concentrated nearer the coasts - perhaps due to shallower water providing more productive feeding.  However, it must be borne in mind that my time on deck has been limited and the time of year certainly plays a part.

For birding ashore in the Mediterranean please see the following pages:


My work in the Mediterranean has been enriched with finds of ancient shipwrecks, unsavoury run-ins with the military, downed aircraft and all manner of other experiences that just cannot be elaborated upon on a website without getting into all kinds of trouble.

Greek wreck in 2000m of water in a previously unknown location


Sicily - Tunisia Late June - July 1992
Small numbers of Cory's Shearwater noted most days and very few other birds at all. During a break in the work the vessel laid up off Pantelleria - here the unearthly calls of the Cory's Shearwaters were heard from the precipitous slopes.

Straights of Messina -Early January 1993
Very little noted at sea at all, small numbers of Mediterranean Gulls and not a whole lot more. However, some more productive birding was had ashore on the east side of the straights.

A typical encounter with Italian hunters was particularly memorable - lead shot rained down around me as two hunters drove a car across a field with two dogs running ahead of them - they were shooting at small passerines of some description.

Cyprus Mid-late July 1994
Not a trip to be remembered for the seabirds with nothing much noted at all. Working fairly close inshore off Akrotiri. Again, better luck ashore....

Off Southern Portugal 02-16 September 1996.
Although not the Mediterranean this seems an apt place to mention this trip as we were working very close to the "entrance" to the Med.

Migrants included a fly-by Little Egret, Bluethroat, Reed Warbler and Turtle Dove onboard; along with a variety of commoner birds.

Joined the vessel off Gibraltar to find two Turtle Dove and a Reed Warbler onboard.

Worked between Almeria (Spain) and Algeria. Typical Mediterranean with few birds in general, just the occasional Northern Gannet and a few Cory's Shearwater. However, 8-12 Cory's Shearwater noted both on the Spanish and Algerian sides with several Mediterranean Sheatwater and a European Storm Petrel also noted within sight of the Spanish coast. Near the coast at Almeria small numbers of Yellow-legged Gull, Lesser Black Backed Gull, Black headed Gulls and even a pair of Audouin's Gulls were seen.

Whether the shearwaters kept near the coast due to the food supply or because the "sea breezes" associated with the land assisted their flight is unknown.

The most appalling thing about this trip was that on the Spanish side of the Mediterranean every square metre of seabed shallower than 600m had been trawled bare; Almost totally devoid of life the seabed was a tragic sight to behold. We saw more benthic life in 2000m of water!


Denia (Mainland Spain) - Ibiza - Mallorca, Spring 2005
Hugely productive at times. This job stretched out from late January to the end of April and provided by far the best birding I have had offshore in the Med. And this time I had a camera, although with only binoculars to use as a telephoto lens things were not exactly straightforward. Photographing with a digital camera through binoculars on a moving boat is no easy affair - and the autofocus is fooled at least 99 times out of 100.....

During February it was generally quiet birdwise but occasional concentrations of seabirds, largely gulls with attendant skuas, were encountered.  Feeding flocks were either largely Yellow-legged Gulls with a few Audoins and Mediterranean gulls mixed in, flocks of 30-40 Kittiwake or single species flocks of Audouin's Gulls (usually 20-30 individuals). The Audouin's Gulls often fed at night and were easily distinguished by call. Great Skua were regularly seen beating up on the gulls. Mediterranean Shearwaters were reasonably regular, sometimes in good numbers, though invariably distant. Small numbers of Northern Gannets also observed.

Whilst sheltering from some extreme weather off southern Ibiza a Shag turned up beside the vessel, this species, a very localised species in the Mediterranean was also noted  around the harbour at Palma, Mallorca.

On 14 March, some 30km north of Denia (mainland Spain) two Barn Swallow turned up during the night. Daylight broke to reveal at least 4 Black Redstart (including 3 males), my first ever offshore Dartford Warbler, a Chiff-Chaff and several Robin.  Seabirds were represented by two Mediterranean Shearwater, an Arctic Skua, 30+ Audoin's Gulls, a Lesser Black Backed Gull and a Kittiwake.

On 15 April, NW of Ibiza a Great Skua was after somewhat unusual prey - a Hoopoe - which finally escaped the skua's attentions. At least 60 Cory's, a couple of Mediterranean Shearwater, 40+ Yellow-legged, 30+ Audouin's and 2 Lesser Black-backed Gulls also around - about the norm for the trip.

Other birds noted offshore during the trip were an Osprey on the aft mast on 19 April, 2 Common Swift and a Northern Wheatear.

Eastern Mediterranean November - December 2009 to January 2010
Once again disappointing for seabirds but some migrant passerines and a Pomarine Skua were seen. For further details see the webside describing this trip here. 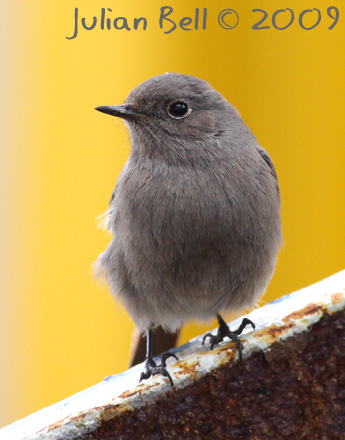 Greater Forkbeard and mine

Black Sea / Eastern Mediterranean - March 2010
A superb migration experience with a once in a lifetime Yelkouan Shearwater passage through the sea of Marmora. Link to more details here.

Eastern Med (Cyrpus - Israel) - January/February 2011
Again largely unproductive in this area but did connect with some interesting gulls in Israeli waters - including Pallas's Gull
Link to more details here.

A few days around Ibiza followed by a few weeks in the Gibraltar Straits produced plenty of migrants and other sightings of interest. Link to more details here. here.

The Trans Med Pipeline inspection - a job that has turned up throughout my working life. Link to more details here. here. 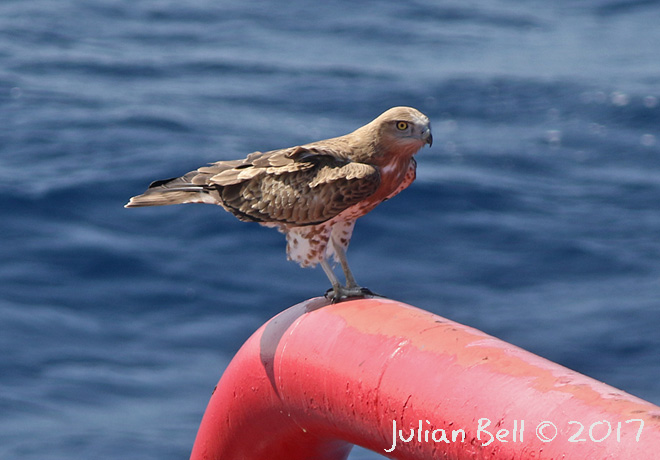 Following offshore seabirds has long been used by fishermen to find activity while at sea. Boats with large fuel tanks, like Viking Yachts for sale , are needed as many of these birds fly for miles. This is why many anglers are pro-conservation at microplastics threaten many seabirds existence.

2558131225581363visits to this side since September 17, 2005.
All content on this site, including Natural Born Birder logo, is copyright © 2005-2022
High resolution images of most images on this website are available for sale. Please contact me for further details or other enquiries