Bird Photography - why do it?

There are hundreds if not thousands of bird photohgraphy webistes out there containing excellent images of almost every conceiavable species. Unless one is prepared to invest huge amounts of time and money there is little chance mere mortals with limited time and budgets have of going up against the professional photographers. It is all too easy to become demoralised when one sees the quality of images out there - but there are more reasons to take pictures than to compete at a professional level.

Earning any money with bird photographs is also extremely difficult - many publications expect something for nothing and even those that do pay for those shots you took pay a pittance that in no way can compensate for the resources spent. Many people happily give away pictures just to see them published. It is unlikely that you will ever become rich on bird photography.

So why bother.....here's a few reasons for starters


Birding or photography?
An important distinction to make is between a birder with a camera or a photographer interested in birds. Are you going birding or photographing when you go out? This is often an important distinction to make if you are out with others. Photography takes time and although some may find it rewarding and satisfying to document a particular species well it will mean that one doesn't cover as much ground or see as many birds.

Personally I am primarily a birder with a camera and haven't got as far as going out with the main aim of taking photographs.

Rarity Documentation
For most birders this is prime reason to take pictures - and was the motivation behind the purchase of my fist camera. Tiring of finding rarities that were often hard to document I took this step and never looked back. This was, and remains, essential as 95% of my time in the field is on my own. In this digital age it is expected that any rarity found is well documented with photographs and if getting a record accepted is important to you then you'd best have some kind of camera with you. Be it a compact camera together with your scope or bins (digiscoping / digibinning) , a compact superzoom or a DSLR with a telephoto lens.

Arctic Redpoll - one rarity that didn't get away


The next time a Slender-billed Gull or a Murrelet sp come flying past I hope I will be ready....(both these have happened to me and although the murrelet would probably still have "got away" the Norwegian Slender-billed would have been in the bag had I had a camera at the time).

Identification
A camera is something of a double edged sword in this respect in that taking pictures can both impair the overall impression of a bird whilst simultaneously providing the possibility of capturing vital details.

On many occasions I have seen a bird and gone straight into photography mode - looking at these photographs afterwards has given me all kinds of headaches. Everything from warblers in bushes to fly-by divers have gone wrong in this way. Had I not bothered with the camera the ID would have been easy - this is an all too easy trap to fall into. 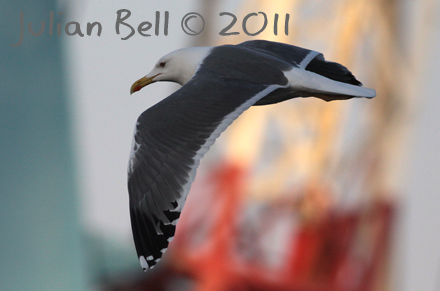 Heuglin's Gull - wouldn't have clinched the ID without the picture


Most of the time, however, the camera has to be seen as an advantage. How long was that primary projection? What was the pattern on P7-P10 on that large gull? Skulking species can be photographed one bit at a time in order to get an overall view not possible in the field.

QC
Not uncommonly an image of a flock of birds shows that there was in fact another species amongst them - something missed in the field. A picture may reveal a misidentification. This may be part of the photography trap - one can be too busy taking the photo to identify the bird correctly but I find this happens surprisingly often. It is not quite true to say the camera doesn't lie but it does find it difficult.


I also find it is often a good way of counting the number of birds in a flock more accurately.

Takes time!!
I was about 10 years old when I was first warned about the perils of photography  - "don't ever start as it will take over your life" I was told by at least two bird photographers. And it will if you let it. The hours spent trying to get that perfect shot and the hours spent going through pictures on a computer aftwerwards all take their toll. Start photographing birds and it is difficult to stop.

Rewarding
Of course the advantages of good documentation  are one thing but photography can also be great fun - something I describe as hunting in an all year open season for pretty much everything..


All content on this site, including Natural Born Birder logo, is copyright © 2005 - 2015
High resolution versions of most images on this website are available for use. Please contact me for further details or other enquiries