Desperate Crossbills
Starving Common Crossbills try to eat anything and everything.


In late June and early July 2009 there was a noticable movement of Common Crossbills which saw them turning up in the Shetland Isles and on a number of offshore installations and vessels in the North and Norwgian Sea. Many of the birds that landed on the vessel I  was working on seemed to be in good form and quickly moved on.

Crossbills are nomadic rather than migratory and such summer movements are quite normal. However, having them turn up onboard under seemingly ideal migration conditions was something of a surprise. Usually it takes some wind and rain to force migrants down onto offshore platforms - or indeed to make them lose their way. One can only assume that these birds had already flown a long way before turning up on the back deck of an offshore survey and construction vessel on the Ormen Lange field north west of Kristiansund on the west coast of Norway. 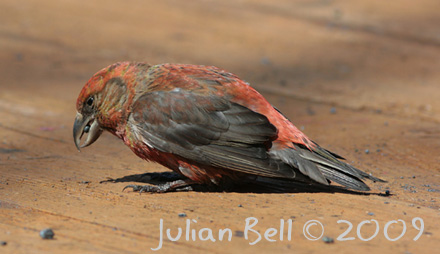 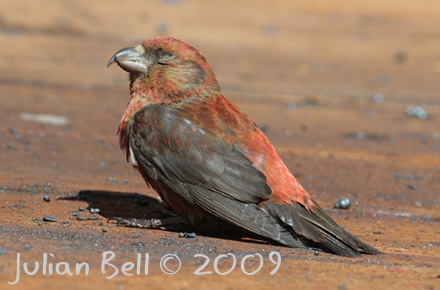 Both the male and female sat like this for long periods with nictating membrane closed but eye open giving them a somewhat spooky look.

The first birds, an apparently moribund pair, turned up on 26th June. These birds were eating welding slag after a recent mobilisation. They also engaged in behaviour I have never witnessed before: the female appeared to feed the male with some presumeably regurgitated food.

Another thing this pair did was sit with their nictating membrane (i.e. "eyelid") shut. This may have been a response to the very strong sunlight, glare from the sea and strong reflections from the white superstructure of the vessel. 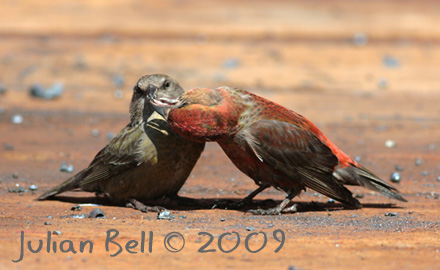 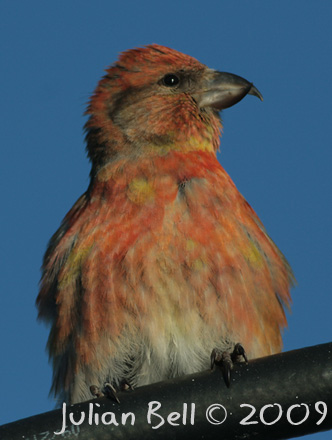 One of the males that turned up the next day


Over the next several days more Crossbills arrived onboard, usually singly or in pairs but on one occasion a flock of seven were watched feeding in the netting of the gangway which was stored on deck. The birds foraged actively pulling out bits of fibre and other things from rope ends and the like. Whether or not they found anything edible remains a mystery (there were some insects onboard which could conceivably been sheltering in amoung the ropes) That Crossbills don't just eat the seeds of pine cones is well documented but I have never seen this level of desparation before.

Some birds did actually eat more normal stuff - crumbs fed to them by crew members who were out sunbathing in the fantastic weather. 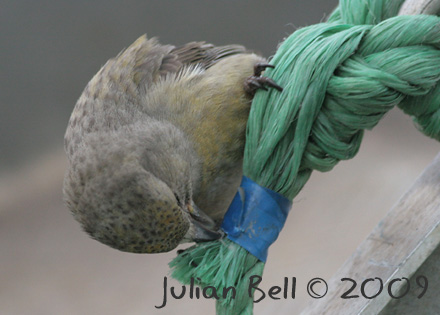 Feeding in the rigging...

That Crossbills eat things other than pine cones is well documented but I have not seen this level of desparation before...

For more about the birdlife at Ormen Lange click here. 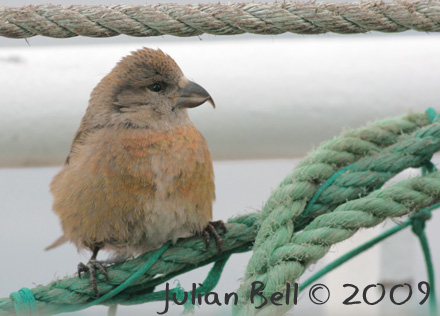 A Canon 400 DSLR and a 400mm telephoto lens was used for all pictures on this page. 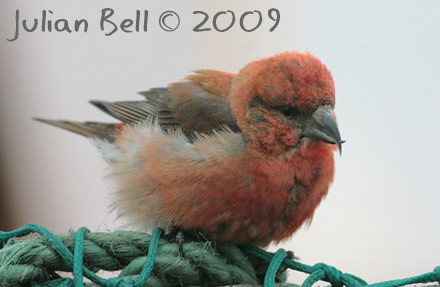 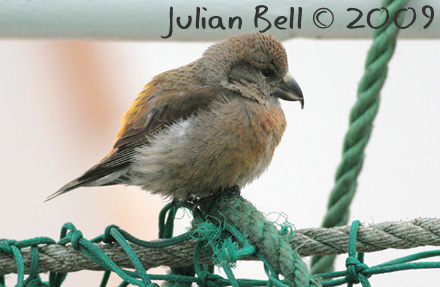