Lanzarote is an ideal place for a family holiday during the winter months, temperatures are such that the beaches can be enjoyed for much of the winter. For the birder it is quality rather than quantity - one is unlikely to make it much over 50 species unless serious efforts are made to bird. However, a visit during a migration season may swell the number of species seen considerably. Hiring a car for at least a day or two is recommended to get around to all the sites with ease, try www.rhinocarhire.com

The island offers a number of interesting species and sub-species including Houbara Bustard, Cream-coloured Courser, Lesser Short-toed Lark and Trumpter Finch. Barbary Falcon occur, although can be rather hard to find at times.

Links to trip reports are listed below:

Playa Blanca makes an ideal base from which to explore the rest of the island. It is the closest resort to the Salinas de Janubio and most of the target species on Lanzarote can be seen within walking distance of the resort. As Lanzarote is not a big island it does not take long to drive to other localities should one wish to do so.

This book is one of the latest to be published for the islands of Lanzorote and Fuertuventura:

This is the guide I have taken with me on each of my visits thus far: 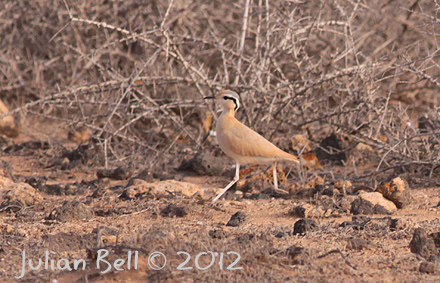 One of the Lanzarote specialities - Cream-coloured Courser

The flock of waders pictured above consists mainly of Sanderling but there is also a Ringed Plover and a Curlew Sandpiper (leading bird) with them. November 2007


Salinas de Janubio Some 10 km or so north of Playa Blanca are the salt pans of Salinas de Janubio. These are in full use (2012) and both the salt pans and the lagoon can provide some of the best birding in Lanzarote - at least for the number of species present. Black-winged Stilts have been common on every visit I have made with upwards of 30 present in November 2007. Other regular waders include Ruddy Turnstone, Greenshank, Redshank, Common Sandpiper, Ringed Plover, Kentish Plover and a variety of others. Bear in mind most of my visits have been during late autumn and winter - there may well be more variety during peak migration. Flocks of larks, Yellow-legged gulls, small numbers of Black-headed Gull and most of the usual species can be seen here too. Barbary Falcon pop in from time to time but are not regular in my experience. Rarer species I have seen here include Black-necked Grebe, Avocet and Slender-billed Gull. In recent years this locality has become a regular site for Ruddy Shelduck - which have even bred here. A pair was present in 2012. Access is straightforward with a car park on the north end of the back lava beach. As I normally approach this area using a mountain bike from Playa Blanca I head down a dirt track to the south of the lagoon.


North of Playa Blanca
There is an area immediately north of Playa Blanca and east of the main road to Yaiza which remains reasonably productive - although this area too is under imminent threat of destruction. Although the guide states that Stone Curlew are regular here I have yet to connect with them at this locality. Cream-coloured Courser do occur here from time to time but do not seem to be regular. Houbara Bustards may still be in the area with at least four present in November 2007 (none in 2012).

Linnets, Kestrels and the usual Berthelot's Pipit, Lesser Short-toed Lark and Trumpeter finch are also easy to find here. During my first vist in 1997 the Canary Island race of Common Buzzard was also present but I have not seen this species on Lanzarote since.

Large falcons (Barbary and Peregrine) may also be seen here from time to time.

North and West of Playa Blanca
The development to the west of Playa Blanca extends almost all the way to Punta Pechuega, a good spot for seawatching, especially in the early mornings when huge numbers of Cory's Shearwater can be seen - I have had up to 500 at a time here.
The area known as El Rubicon, on the north side of the mountain has suffered from huge development which has pushed the Houbara Bustards, previously regular here, further out. Remarkably, despite the encroaching urban sprawl Houbaras can still be found north of the landfill / quarry site - I managed to connect with the species here during my most recent visit in November 2007 - but not in 2012.

East of Playa Blanca
There is a national park to the east of Playa Blanca. Access is via a dirt track, the first part of which is pretty bumpy. One must pay a small fee if arriving by car - bicycles go free. There are some wonderful beaches such as Playa Mujera, Playa Papagayo and others in this area which can be very busy with tourists (and even nudists - so watch where you point any optics!).

Early in the morning waders can be seen on the shores, species can include Sanderling, Grey Plover, Whimbrel and so on. However, the main reason I go there is the scrub just behind the shore where Spectacled Warbler are reasonably common - Playa Mujera is probably the closest place to Playa Blanca for this species. The scrub can attract other migrants in season.

There are some archeaological remains in this area which are worth a visit in their own right.

Birding the resort of Playa Blanca
There can be quite a bit of interest in the resort itself - in the hotel gardens, along the shore, over the sea and overhead. The gardens and plantations are the best place to see migrant passerines from further north - species such as thrushes, warblers and Meadow Pipits often join the resident Collared Doves and Spanish Sparrows in these areas. Grey Wagtail have also been a regular feature here during my visits.

Along the shores most of the wader species can be very tame - Ruddy Turnstones scamper among sunbathing tourists, Little Egrets and Grey Herons are also regular. Yellow-legged Gulls and Sandwich Terns are invariably present and Cory's Shearwater can be seen in season. 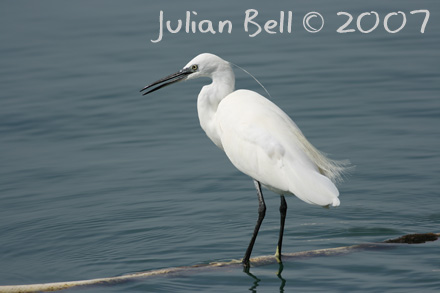 Raptors can occasionally be seen overhead - the local race of Kestrel is regular and I have also recorded both Barbary Falcon and Marsh Harrier over the resort.

As soon as one moves out of the resort itself many of the speciality species can still be seen, although with the current rate of expansion it must be only a question of time before some of these disappear.

Plains south west of Teguise.
A fantastic area to connect with most of the Lanzarote specialities and a visit is compulsory for anyone interested in birding. All of the good stuff can be seen here including Houbara Bustards, Cream-coloured Courser, Stone Curlew and more. It is also a regular site for Cattle Egrets, Hoopoe and more.

The area around Soo is the best for Stone Curlew in my experience. The guide book states that the Houbaras prefer the area to the south (the cultivated area north of the main round) and this has proved true for me in the past. However, during my last visit the only Houbaras I saw were at the sandier wasteland area further north - this may have been due to repeated fly overs from a microlite aircraft. Whether this microlite flying is a regular feature or not I can't say but the light aircraft landed and took off repeatedly during the few hours I was there - potentially a serious disturbance to the bustards.

Huge numbers (hundreds) of Lesser Short-toed Lark can be seen here - their Sand Martin like calls filling the air.

Links to other websites covering Lanzarote can be found below:

Other wildlife
There is plenty of other wildlife to be seen on Lanzarote including lizards and all kinds of marine life - including good numbers of dolphins at times. A sample of images is given below:

Algerian Hedgehog, Lanzarote, March 2012
As with hedgehogs everywhere these are more often seen as roadkill than alive, this one was photographed on the seafront at Playa Blanca.

All content on this site, including Natural Born Birder logo, is copyright © 2005-2017
High resolution versions of most images on this website are for sale, please contact me regarding image use or for other enquiries